Wish we could say more. That’s how Apple announced the special keynote event for Tuesday September 9. Traditionally it is the moment on which the company gives an insight into the future and introduces new products. Of course we followed the presentation live. These are the most important facts. 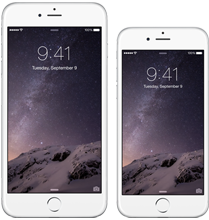 Apple launched two new iPhones. The iPhone 6 with a screen size of 4,7” and the bigger iPhone 6 plus with a screen of 5,5”. The new iPhones have a sharper display and a noticeable rounded design. Moreover the iPhone is of course a lot faster and the camera is also better. But all this is more evolution than revolution.

The most important fact is that the new iPhone has NFC on board, which can facilitate contactless payments. The iPhone also has a new sensor, the barometer. It can measure elevation, such as tracking flights of stairs. It works by analysing relative air pressure.

The iPhone 6 is sold for a price from €699 (without subscription), the iPhone 6 plus for a price from €799. It’s a steep pricing that is not within reach for every consumer. Both models will be available in the Netherlands from September 26. More details can be found on the Apple website.

The rumours have been around for a while, but Apple will make its first move into mobile payments. A complete new payment process based on NFC in combination with Touch ID makes contactless, safe and anonymous payments possible for both the iPhone 6 and Apple Watch. For the time being only in the US, but it looks like important players like credit cards firms, banks and retailers have embraced the initiative on a large scale. You can simply make a payment by adding your credit card to Passbook.

It will take way much more effort and time for Apple to reach a mobile payment standard, but they made an important first move. More details can be found on the Apple website.

3. One more thing... Apple Watch
Finally there was a new ‘one more thing’. Early 2015 Apple will launch its long awaited smartwatch. The Apple Watch comes in lots of different styles, colours and models for everybody’s personal taste. It has a big and small version and is available in a classic, sport and deluxe edition.

The user interface works with touch, pressure and the special ‘digital crown’ button. Taking the place of where traditional watches might have a winding or time-setting wheel, the digital crown is a wheel that users can spin up and down to zoom in and out of apps or scroll through a list. A button right beneath the digital crown sends users back to the home screen from an app or to the clock from the home screen.

With the digital crown, Apple seems to have found a creative solution for the most common user interface problem on smartwatches, namely the lack of screen size, which makes navigation a tough job.

The screen of the new Apple Watch is made from Safire glass and is pressure sensitive. This gives new possibilities for navigation as well. Developers can use the Watchkit to build new apps. The Apple Watch standard comes with fitness, activity and workout apps. A combination of a heart rate monitor and other sensors makes tracking your daily health easy. No more need for a sport watch. The Apple Watch still needs your iPhone for a lot of functionality and you can voice control it with Siri.

The Apple Watch works with the new iPhone 6, but also the older 5 models are supported. The pricing will be from $349. It comes with a Magsafe based inductive battery charger. The battery is supposed to last one day and Apple assumes that consumers load the device during the night. More details can be found on the Apple website.