Even the best app won’t be an instant success. With more than 700.000 apps in both the Apple Appstore and Google Play you have to make sure you will get noticed. Appstore Optimization is one of the instruments you can use to promote your app.

There is an important parallel between the growing popularity of the web and apps. In the late 90’s lots of new websites were launched. Everybody wanted a new website. But often they were visited very poorly. That’s why a whole new industry emerged that focussed on online marketing and search engine optimization. In the past years apps have been booming. There is an exponential growth in the number of apps.

But most companies pay little attention to the promotion of the apps they have invested in heavily. But search is also very important for apps. More than 60% of app users find new apps by searching the appstores. Luckily there is a way to optimize the findability of your apps. Appstore Optimization (ASO) is a must for everybody that wants to be successful with apps.

At the Mobile Pioneers conference I did a presentation about the facts, tips & tricks for appstores. With a summary of all the elements that are important to optimize the findability of your app in the Apple appstore or Google Play. And an overview of how easy (or not) it is to launch an app in both stores. The table below gives a general summary of both: 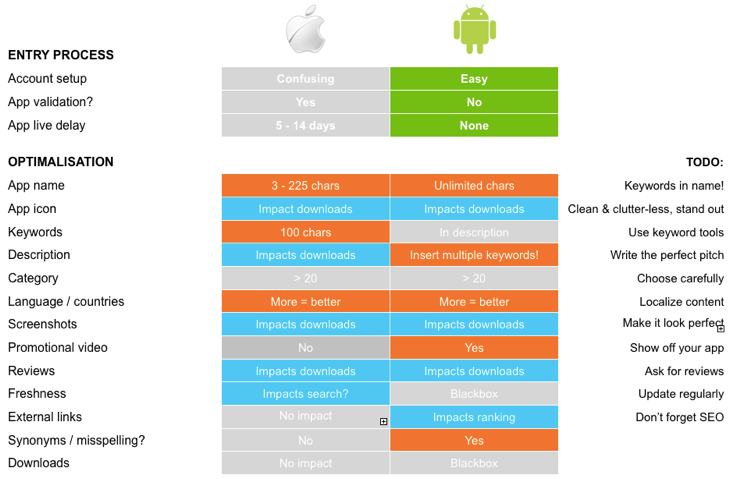